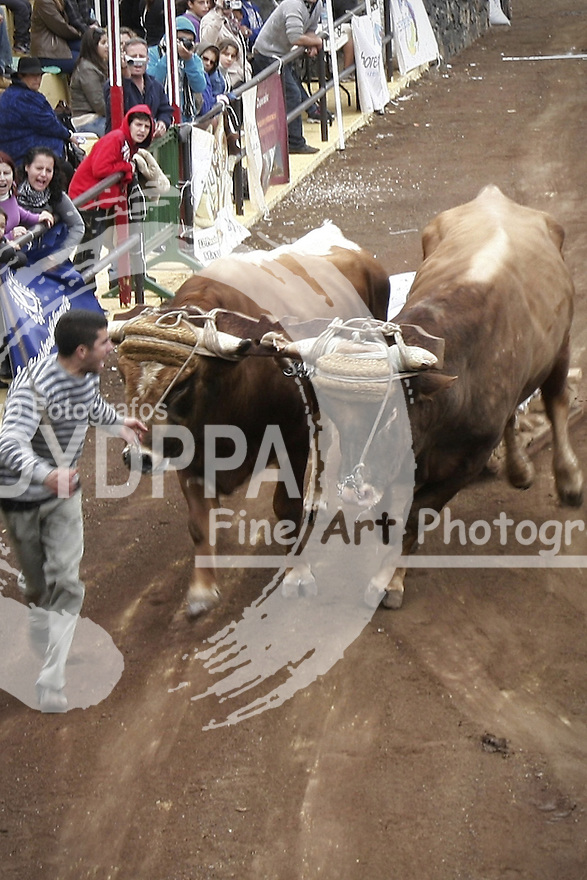 03/02/2013. Santa Cruz de Tenerife.Canary Islads.Spain. Drag cattle (sport canary)
In this sport, a couple of pieces of cattle (cows, oxen and bulls) have to drag a weight in the shortest possible time through a delimited field. It has a more recent origin than other traditional sports canaries since birth is in the twentieth century. His practice is subject to livestock markets and the festivals, where the exhibits livestock farmer 'rough', which has made ​​great efforts in breeding and conservation.
There is a rectangular field narrows, about 50-70 m long and 15 wide, usually land, where animals (called 'yoke') must drag a number of bags of 100 kg each (between 6 and 11 ), placed on a sled named 'corsa'. The pull test is performed against time, having a maximum driving time of 4 minutes. The yokes are guided by a stick by the figure of 'herdsman' or 'Guayero'. (C) Enrique Tapia / DyD Fotografos
Enrique Tapia / DyD Fotografos
SPANISH CULTURE